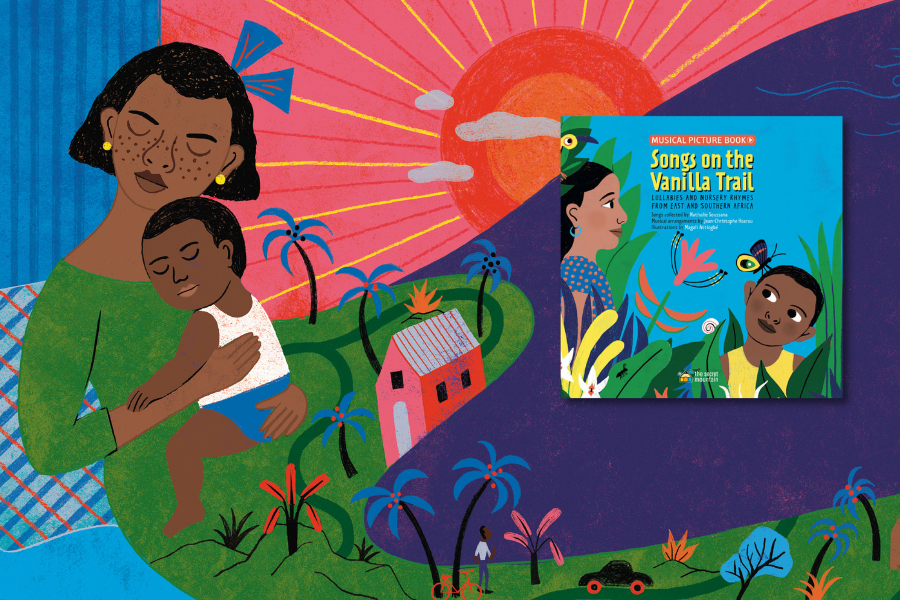 Slated for release October 1, 2021, Songs on the Vanilla Trail: Lullabies and Nursery Rhymes from East and Southern Africa is an enchanting collection of 25 traditional songs that pay homage to the rich cultural heritage and multilingual communities of the region.

“Behind this collection are several beautiful adventures and talented performers,” says Nathalie Soussana, who collected songs for the book. Bringing more than eight musicians and 20 backup vocalists together to record the accompanying album requires both determination and a little luck. Costa Neto, a Portugal-based artist from Mozambique, joined the project after Soussana bumped into him on a flight.

The album opens with a lullaby called “Une tite fleur l’amour” (“A little flower of love”), performed in Réunion Creole by five-year-old Éloïse Agenor-Poinsot alongside her father, Lionel Agenor. “Watching them sing together was a really emotional moment,” says Soussana of the recording session.

The song pays a subtle homage to Réunion’s orchids, which the horticulturalist Edmond Albius started pollinating with a technique he invented in 1841. An orphan born into slavery, Albius discovered his simple method of extracting vanilla at the tender age of 12, introducing the process throughout the region, which produces more than 60 percent of the world’s vanilla.

The second song on the album uncovers the origins of a tune that will sound familiar to fans of Disney’s 1994 film, The Lion King. Popularized in North America as “Wimoweh” and “The Lion Sleeps Tonight,” “Mbube” was first written in Zulu by Solomon Linda, leader of the acapella band, The Evening Birds. In the 1940s, the song sold 100,000 copies in Africa, but Linda only ever received a small sum. His story, and the effort to restore royalties to his family, are the subject of the 2019 Netflix documentary ReMastered: The Lion’s Share.

Nolitha Dlabhongo recorded her rendition of “Mbube” in a repurposed shipping container in Cape Town, South Africa, not far from Johannesburg, where Linda originally composed the song. The unconventional studio forms the headquarters of Philippi Music Project, a social enterprise founded by Sibusiso Nyamakazi and Baptiste Guillemet that has supported more than 500 artists from the townships of Cape Town.

Nawal Mlanao, a singer, songwriter, and multi-instrumentalist from the Comoros Islands known for infusing her Afro Sufi roots with global sounds, performs on multiple songs in the collection. On each track, an array of indigenous instruments are played by top performers, such as Justin Vali, world-renowned master of the tube zither valiha, and Tao Ravao, an acclaimed virtuoso of the kabosy.

Songs on the Vanilla Trail features 80 pages of vibrant illustrations by Magali Attiogbé, a France-based artist who hails from Togo. Lyrics appear in their original language alongside English translations, notes on history and song origins, and a map of the region. The accompanying album can be listened to on CD or via digital download. “Readers are sure to learn new facts about this part of the world while appreciating its mix of global cultures,” says Kirkus Reviews. “The book is beautifully produced on thick, matte paper, and the diversity of musical styles produced is impressive.”

The forthcoming collection is the eighth title in an award-winning series that spans several global cultures and traditions. The most recent publication, Songs in the Shade of the Cashew and Coconut Trees, was awarded a Children’s Africana Book Award in 2020.

Posted in Uncategorized.
Share
PreviousCreate a Playlist for a Chance to Win Five Books!
NextJoin The Secret Mountain at Kids POP for A Picnic in the Sun
Cart Close