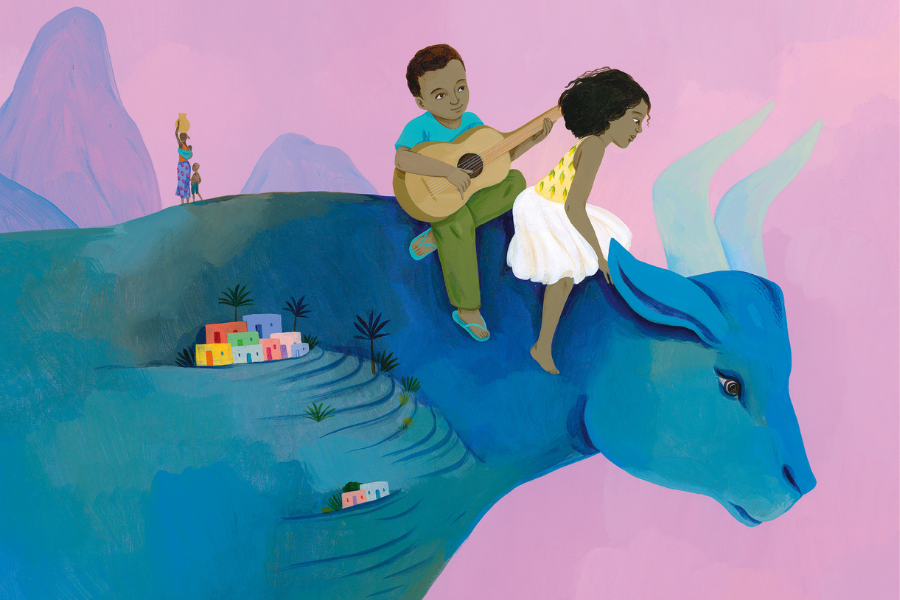 On April 8, the 28th annual Children’s Africana Book Awards honoured Songs in the Shade of the Cashew and Coconut Trees at a virtual ceremony at the Library of Congress. The collection of lullabies and nursery rhymes from West Africa and the Caribbean earned an Honors Books for Young Children award, alongside Sulwe by Lupita Nyong’o and Grandpa Cacao: A Tale of Chocolate, from Farm to Family by Elizabeth Zunon.

“I am honored to receive this recognition from the CABA Awards Committee, Africa Access, and the Outreach Council of the African Studies Association,” said author Nathalie Soussana in her video acceptance speech. “This collection was the result of the generous collaboration of many performers, singers, and musicians—without whom, the book would not exist.”

Songs in the Shade of the Cashew and Coconut Trees is the result of collaboration between more than 30 artists, musicians, and producers. Joining Soussana in receiving the honour was veteran Cape Verdean musician Teófilo Chantre and Dayleline Alvarez, one of many new voices celebrated on the album. “I am very happy for your recognition,” says Chantre. “Congratulations to all of the team on this project,” said Alvarez.

The collection of two original and 21 traditional songs features a range of stories about motherhood, children playing at recess, sisters braiding each other’s hair, as well as the suffering associated with colonization, slavery, and political instability. Artists like Sidó, who hails from Guinea-Bissau, contributed to the rich storytelling heritage of the songs by imbuing performances and lyrics with new meaning. In “N’téné,” he adds a verse to reflect his nation’s mixed history: “My name is Africa. My heart is great and so is my suffering. My Black, white, and Métis children suffer too.”

Lyrics are sung and included in their original language and transcribed into English, and appear along with extensive notes describing the cultural and historical background. Songs in the Shade of the Cashew and Coconut Trees is the fourth installment of a series of African music traditions. Planned for release in the fall, Songs on the Vanilla Trail will feature lullabies and nursery rhymes from East and South Africa.

The Children’s Africana Book Awards are presented annually by the African Studies Association to authors and illustrators of children’s and young adult literature on Africa with the aim of promoting a better understanding of African societies and issues. Learn more here.

Watch the full ceremony below. Songs in the Shade of the Cashew and Coconut Trees begins at the 1:11 hour mark.