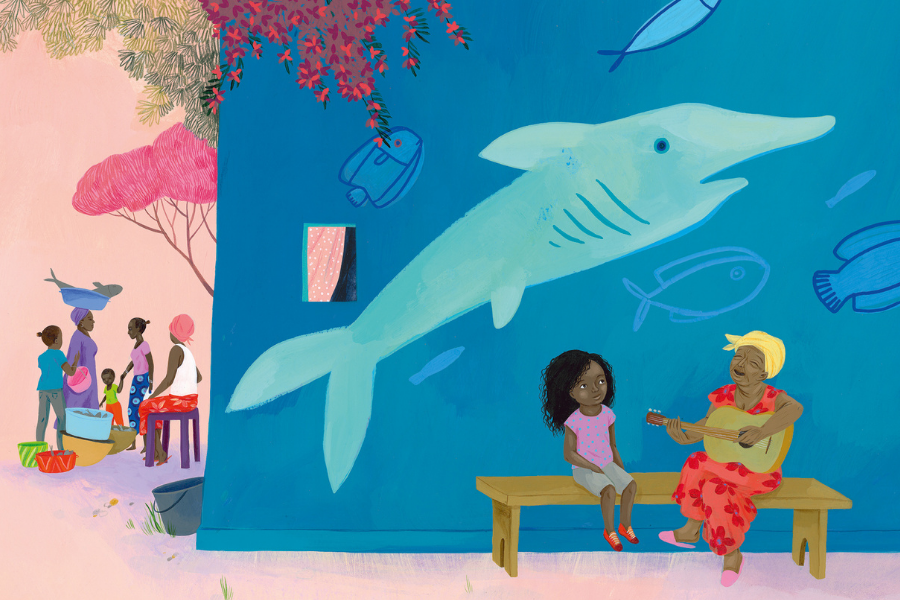 As one of our readers recently pointed out, “Songs are a way to tell stories, especially in cultures with oral traditions.” Learn the stories behind these popular African and Caribbean nursery rhymes and lullabies, which can be found in the collections Songs on the Vanilla Trail and Songs in the Shade of the Cashew and Coconut Trees.

In the late 1970s, Kenyan musician Teddy Kalanda Harrison and his band had a regular gig playing at a popular hotel in Mombasa. “I was sitting at the pool bar after a performance and there were tourists in the pool playing around and joking, trying to speak Swahili,” Harrison recalls in a BBC interview. “I got this idea to write a song with the simplest words in Swahili and get the tourists to learn Swahili as they sing along and dance to our music.” The song went on to become a major hit. From Songs on the Vanilla Trail.

Amina is a clapping game common in Gabon and many other places. Played in the streets and schoolyards, it is based on rhythm and coordination. Standing face-to-face, children clap each other’s hands (one hand pointing up, the other pointing down then both forward before clapping one’s own hands three times). From Songs in the Shade of the Cashew and Coconut Trees.

This is a delightful lullaby in Réunion Creole. The tree referred to in the song—the jambakka (jamalac), also known as wax apple and rose apple—is a tropical tree that produces attractive bell-shaped red fruit. In this version, then five-year-old Éloïse Agenor-Poinsot sings alongside her father, Lionel Agenor. “Watching them sing together was a really emotional moment,” says author Nathalie Soussana of the recording session. From Songs on the Vanilla Trail.

After it was popularized by Pete Seeger, The Tokens, and even Timon and Pumbaa in Disney’s The Lion King, this tune is widely known as “The Lion Sleeps Tonight.” The original song, “Mbube,” was first written in 1939 by Solomon Linda, leader of the South African a capella band, The Evening Birds. Despite the song’s success, Linda was never properly credited. His story and the effort to compensate his family are the subject of the 2019 Netflix doc ReMastered: The Lion’s Share. From Songs on the Vanilla Trail.

“Day-O!” was originally sung by Jamaican dockworkers as they loaded crates of bananas into the holds of ships in the early morning. When the job was finished in the wee hours of the morning, the foreman would inspect their work. The mento call-and-response song was popularized in North America by Harry Belafonte. From Songs in the Shade of the Cashew and Coconut Trees.

Attributed to Jean-Philippe Rameau, this French nursery rhyme found its way into more than a hundred languages, including Malagasy, Réunion Créole, Xhosa, and Mare Comorian, by way of French colonization in South and East Africa. Compare four lyrical versions of the song from Madagascar, Réunion, South Africa, and Mayotte in Songs on the Vanilla Trail.

Listen to these songs and more on Spotify, and discover more songs from around the world here.