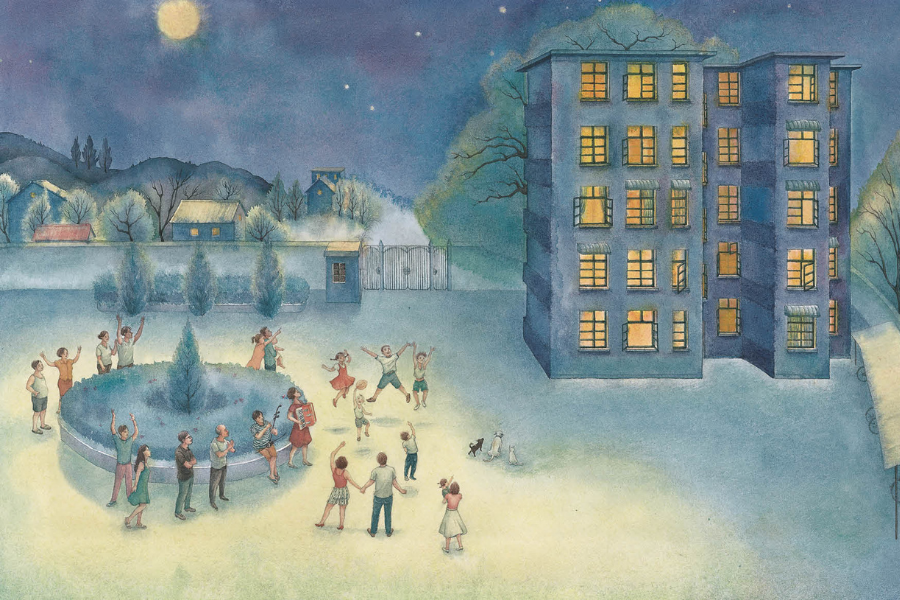 Summer Moonlight Concert tells the story of one hot summer night when the power goes out in an apartment building in a small town in southern China. Xiaomi is preparing dinner with her parents when she has a bright idea: Why don’t they play music under the moonlight in the courtyard? Soon they are joined by all their neighbours for an impromptu celebration.

Acclaimed Chinese author and artist Han Han shares her inspiration for the story and its dreamlike visuals.

What inspired you to write Summer Moonlight Concert?

In early 2013, my husband and I moved into a new home outside 5th Ring Road in Beijing. In April, the clivia plant we had kept for several years suddenly bloomed, and along with it came the surprise that I was pregnant. Summer Moonlight Concert came into my 30-year-old life alongside my oldest son, Shell. When the clivia bloomed I wrote the story in one go, with a deep fondness for my childhood.

When I was a child, I moved several times with my parents. But the scene of my home in my childhood dreams was always a dormitory building, located on the primary school campus where my mother worked. I lived there for 12 wonderful years, from when I was five years old until I left for college at 17. There was never a shortage of playing and singing in our house, and my dad used to organize various ball games in the playground for the teachers. Everyone shared good food cooked between the families, and the children played house and hide and seek in every corner of the campus.

I miss those days of playing with friends and being surrounded by neighbours who were like family. My childhood is as long as the dinosaur era in my heart, and the small-town life radiating from this campus was my whole world.

I poured this nostalgia into Summer Moonlight Concert. Having material and emotions is not enough to form a story. The story needs an opportunity and a thread to connect all the memories and emotions of childhood in my mind. A simple, rich story is actually the most difficult kind to tell. After studying a lot of excellent international children’s books, I was able to incorporate the unique rhythm and pace of picture books into my writing.

Summer Moonlight Concert has been a long process, from the emotional gestation that built up throughout my childhood, to writing the story, and finally turning it into a book.

What were your favorite stories as a child?

From the early age of five or six years old, my mother would order children’s picture books for me every year. I still remember several stories, including the warmly colored illustrations of a bear driver delivering tulips to animals and the black and white line drawings of a highland explorer’s travels, where I first learned about the magical cordyceps.

There was also a folk story about the origin of Koizumi scissors, from which the famous Zhang Xiaoquan Scissors was born. Strong black and white drawings told the tale of Zhang Xiaoquan who caught two fierce pythons in his village and rolled them up and nailed them into scissors. After 30 years, whenever I recall my early reading, the plots and images of these three stories seem to have become the wallpaper of a room in my brain that never fades.

Once I was able to read longer stories, I became obsessed with classic fairy tales from around the world, such as Grimms’ and Hans Christian Andersen’s fairy tales, Alice in Wonderland, and Wizard of Oz, as well as many Chinese folk tales and the works of a great Chinese fairy tale writer Zheng Yuanjie. Fantasy experiences and images from Alice in Wonderland and the Wizard of Oz, seem to be so interwoven with my faraway childhood life, sometimes I confuse reality with dreams and remember them as my own adventures.

The cartoons of these classic stories have always gripped my heart, too. I still remember how I could feel the heat and pain of the little mermaid’s toes on the ground when she walked, and how I was sad when she finally turned into sea foam.

In addition to being an author, you’ve also illustrated several popular children’s books. What was it like to illustrate your own story?

Summer Moonlight Concert was written in one go after years of studying picture books and accumulating life experiences. Initially, drawing the scripted subplot didn’t work out so well. In these first attempts the emotions of the story fell flat.

My editor suggested I pause and look beyond my memories to examine this summer night, the campus nestled in a small town, and the lives and stories of my old neighbours. “Take God’s point of view and paint the stage under the moonlight,” he suggested, and his words instantly lit up my memory. The idyllic scenes of green hills and water and the warm images of neighbourhood life came flooding back to me.

Armed with my drawing tools, I went home to the south to raise my baby with my parents. While in my hometown, I stopped by the primary school I attended a number of times to draw inspiration and talk to my old neighbours, many of whom still work and live there. My parents were retiring, my childhood friends had become parents, and the years had left deep and light marks on everyone’s faces, but we talked without feeling like strangers.

A neighbour told me that the school would soon be demolished and that the campus and dormitory building we used to live in would soon disappear into the expanding borders of the city. My mother’s old colleagues were moving out of the campus, which held many people’s memories for almost 30 years, one by one. On one of my visits, I climbed to the top floor of the school building, spread out my drawing paper, and once again traced the campus and the high-rises surrounding me, while the sunset’s afterglow enveloped me in a warm red.

After painting the first overlooking panorama in Summer Moonlight Concert, I stood at the table and gazed longingly at the place where I had once lived, the light of the waves still shimmering on the wet paper, and the fresh evening breeze seemed to carry the smell of earth across my heart. Tears came streaming out. This is my hometown, the world of my childhood, and I think I captured it! The small town in the foggy south, hills in the distance, the humid air, and the outskirts of the town filled with the smell of ponds and vegetables growing out of the soil.

What would you like readers to take away from your story?

I would like to answer this question with the words of a few readers. One reader, a cousin’s classmate, wrote a long response that she forwarded to me. One of the paragraphs read:

“This picture book suddenly made me realize that I now neglect the beauty I used to appreciate as a child. When you feel irritable, drink a fresh glass of water, play some light, soothing music, close your eyes and remember the people and things around you. Busy city lifestyles make us forget the charms of life. After reading Summer Moonlight Concert my heart was inexplicably soft and moved. Everyone’s life is wonderful.”

I also met a reader at a book signing at the China Shanghai International Children’s Book Fair who asked me to write a message on the front page of their copy of Summer Moonlight Concert: “You must do something to make the world more beautiful.”

I think everyone receives a unique gift in childhood and waits to open it at the right time. I opened mine when I turned 30-years old when I created this picture book. I hope that through this story I convey beauty and warmth and that we should cherish every moment, including the most ordinary and authentic aspects of life. 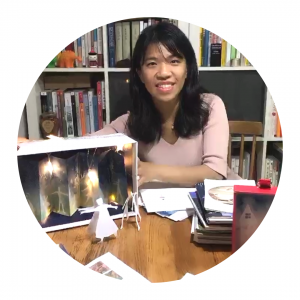 ABOUT HAN HAN: Han Han (含含) is a graduate of the Guangzhou Academy of Fine Arts. She has illustrated several popular children’s books in China including Peng Yi’s The Monster Daddy and Yin Jianling’s Dragonfly, Dragonfly. She received the prestigious Golden Pinwheel Young Illustrators Award in 2015 for the Chinese version of Summer Moonlight Concert.

Posted in Uncategorized.
Share
PreviousListen, There’s Music All Around, Says Gema Sirvent
NextBehind the Illustrations of Sing Out! With Sophie Casson
Cart Close