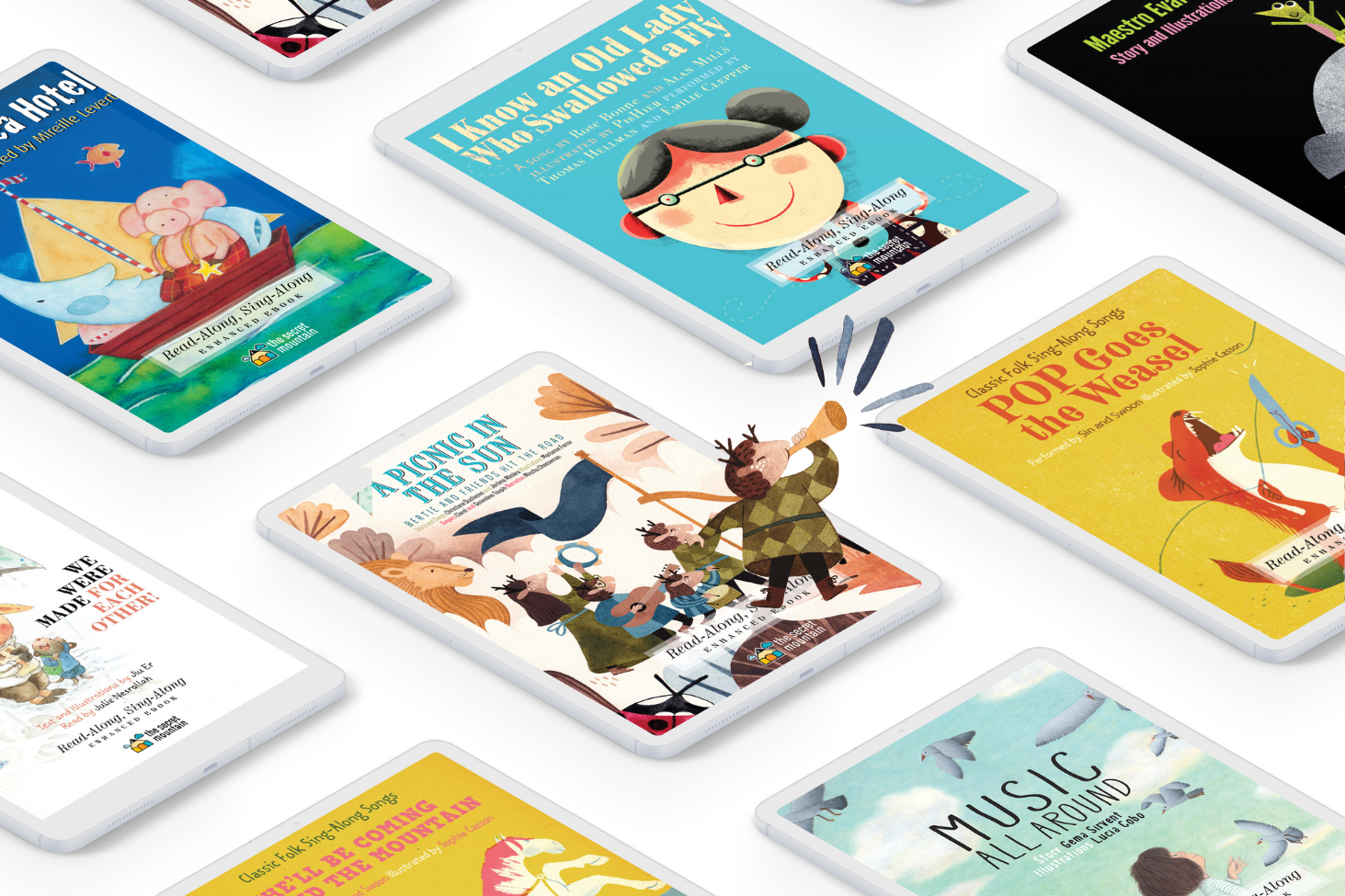 Every musical story published by The Secret Mountain is available in audiobook, ebook and enhanced ebook formats. These read-along and sing-along formats make engaging with the story even more fun for young children. Listen to the audiobook as you flip through the hardcover version. Bring the ebook on your next vacation. Or combine audiobook and ebook with a musical enhanced ebook. On this list, we round up some of our favourite enhanced ebooks.

The Four Seasons of the Pipa

On a cold winter night, a young girl dreams of visiting her faraway grandfather in Kunming, a magical place in China known as the eternal city of spring. As gusts of snow blow outside her window, the gentle sound of her mother plucking the pipa in the family room wraps around her like a warm blanket.

A Picnic in the Sun

An imaginative musical tale comprised of a narrated story interspersed with original and traditional songs that follows four inseparable friends who love being together. Bertie and his buddies never ever got bored with each other… except for the time when it rained for four straight weeks!

Meet a quirky old lady who swallows a heap of animals, from a dog, cat, bird, spider and that infamous little fly, only to meet an untimely demise. This classic tale is followed by a potpourri of simple, singable songs often focusing on numbers and letters, with a contagious and danceable rhythm.

An orange sunset falls on a wide span of prairie grass. Birds cooing resonates that it’s time to retire to their nests. Toddlers yawn and stretch after a fun day of play. A warm wind at twilight says it’s time for bed. Such is the ambience created by 13 soft and soothing lullabies that capture the rustic prairie sunset embraced by nighttime.

Sofia is off to her grandparents for the holidays. She leaves her seaside home, its singing waves and whispering sand knowing that the sounds of the forest await her. Amongst the dark pines and the majestic oaks, she’ll discover the music of the night, the songs of a fox, an owl and a wolf.

Maestro Evarista is a conductor in search of an orchestra. With a heavy cart full of instruments, the little lizard sets out to find musicians. One by one, she comes across an assortment of animals who lighten her load as they pick their parts in what becomes a ten-member menagerie.

Travel through time following a charming little mouse called Minim who loves cheese and music. One day, he witnesses the arrival of a dapper, young Mozart and his family as they set foot on a dock one late, cold night. He is no ordinary boy, sporting a white wig and dressed in red velvet, on his way to play several concerts in the city.

Illustrations pop off the page with lyrics to this popular children’s folk song, performed by the Canadian duo Sin and Swoon. For another take on the classic tune, watch the animated video on YouTube.

Down at the Sea Hotel

A fantastical trip to an underwater hotel where the tuna is tired and the seahorse is sleepy. This dreamlike story is based upon the titular lullaby and is followed by bedtime tunes written by songwriters like Tom Waits, Neil Young, Billy Joel, Carole King, Don Henley and Gord Downie.

Sophie and Emilio spend their days enjoying life’s small discoveries in a tiny seaside village with their best pet friend ‘Sir’ and a mischievous crow. Sophie’s regular visits and gift exchanges with her great-uncle leads to teachings about how value is determined by the intentions of the heart.

Lullabies resonate from Belgium to Brazil within this musical collection of 14 songs. Able voices bring songs from places like Italy, Cameroon, Indonesia, the Seychelles, Israel, Germany and Occitania, sung in the language of the country, granting the mind’s eye incentive for adventure.

She’ll Be Coming Around the Mountain

Striking illustrations, rich in color and texture offer an original interpretation of this popular traditional children’s folk song recorded by exceptionally gifted musicians. The illustrated lyrics are followed by a recording of the featured song.

Xiaomi will never forget the magical sounds she heard one hot summer evening when the power went out in her family’s apartment building. It happened at day’s end while her parents were preparing dinner. Her father lit candles while suggesting they take out their musical instruments and descend to the yard to perform for their neighbors.

A story of an endearing little blue stuffed doggy with a soggy, red, cotton tail. “Snag,” as his friends affectionately call him, finds himself in a conundrum when his parents go out for the evening while he’s banished to the bathroom closet, all alone.

We Were Made for Each Other

Enjoy the simple pleasures that fill a day in the life of Little Sun, a fearless, adorable pig with a big heart. She’s always on the lookout for challenges, big and small, and never seems to get discouraged as she embarks on all kinds of adventures with playmates Little Mouse and Miss Rabbit.

Tomorrow is a Chance to Start Over

Ira and Isabelle, who live in a tiny red house by the sea, decide one night to escape the sound of the city’s beeping cars and sail off to a faraway land where they learn from a new friend—a robin with a soft voice—that dreams really can come true.

Little stars shine (like diamonds in the sky) in this interactive take on the classic lullaby, with illustrations by Sophie Casson and a performance by the folk duo Sin and Swoon.

A Poodle in Paris

In this charming story featuring funny illustrations and catchy songs, a dog named La Grande Fifi strolls through the streets of Paris bumping into a wide assortment of friends, including her Bichon Frisé band who plays for her in a club called “Le Bow Wow!”

Didn’t find what you were looking for? Our titles are available on additional streaming platforms, including Libro.fm, Numilog and YouScribe. Look for the title and format of your choice on most major providers. Discover our full enhanced ebook collection here. For additional information, email info@thesecretmountain.com.

Posted in Uncategorized.
Share
PreviousRing in the Lunar New Year with Chinese Songs and Stories
Next8 Singalong Books that Children and Parents Will Love
Cart Close